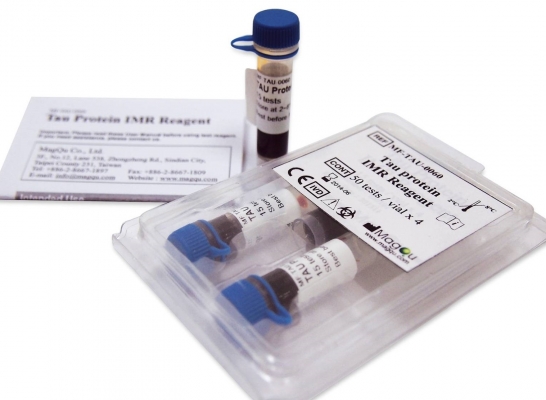 Use Tau protein IMR Reagent only with the XacPro-S System (MagQu Co., Ltd.). The reagent is used to quantitatively measure Tau protein in human fluid specimen, such as plasma.
Tau protein is a microtubule-associated protein and is abundant in nervous system. Tau protein can maintain the structure of neuron cells and support the transport of substance. When tau proteins become defective, It will result in the self-assembly of tangles in brain and increased some neurodegenerative diseasesincluding Alzheimer’s disease (AD)、Pick's disease、Parkinson's disease (PD)、Progressive supranuclear palsy(PSP) and Corticobasal degeneration (CBD).
The Tau protein IMR Reagent is designed for rapid quantifying Tau protein by Immuno Magnetic Reduction (IMR). We conjugated the antibody on the surface of around 50 nm-in-diameter Fe3O4 magnetic particles. When the antibodies on the surface bind with Tau protein, the magnetic particles form clusters. Therefore, the ac susceptibility (Xac) of magnetic particles would be reduced in the adding ac magnetic field. By measuring the reduction of Xac, we can quantify Tau protein in the sample easily, rapidly, and accurately.